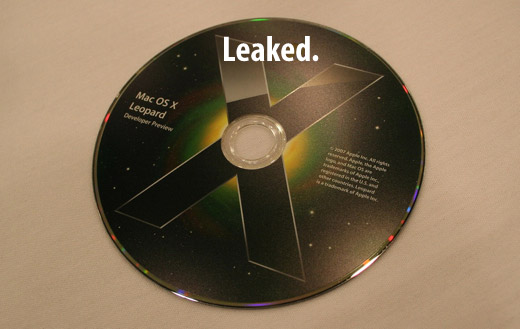 A good deed never goes unpunished. Over at CrunchGear yesterday, Nicholas broke the story of the WWDC beta of Mac OS X Leopard’s leak onto the Oink BitTorrent Web site. (Oink is a so-called “secret” or “private” BitTorrent tracker that specializes in music, though it also has a fairly vibrant Mac software user base.) We did so because of the particulars involved. No, that a copy of Leopard finds its way onto the Internet isn’t news per se; that happens with every developer build. But the WWDC beta—build number 9A466—is a near-final version of the upcoming operating system and rumors had suggested that Apple had taken great care in making sure that the build would never be leaked. So when it did leak yesterday morning, we considered it newsworthy.

Within minutes of posting the story, several people, presumably Oink users, had flooded the post with genuinely vile statements. I don’t know how his reporting on the illegal leak of a piece of software gives them the right wish awful, terrible things upon Nicholas’ family members, his mother especially, but that’s their prerogative. It’s important to note that also within minutes of our reporting on the story the Torrent file in question was removed by an Oink admin, only to be re-uploaded soon after.

The Leopard beta has since spread across the Internet and is now available on more public BitTorrent trackers like The Pirate Bay. It’s also in the process of being uploaded onto Usenet. So any effort on Apple’s part to stop the bleeding, so to speak, has just become harder.

For most of the day today the Oink Web site has been down. Whether or not Leopard’s leak (or even our reporting) has anything to do with this I don’t know. We contacted Apple yesterday regarding the leak and didn’t receive a reply, but it’d be naive of me to believe that Apple and other parties aren’t currently monitoring these so-called “private” BitTorrent trackers for such activity.

How Apple chooses to respond to Leopard’s leak remains to be seen.