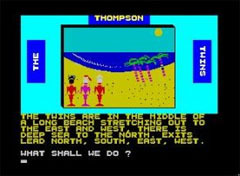 I’ve seen easter eggs before where small, fun games are embedded into other games or in machines of some sort, but this has to take the cake as far as hidden gems go. Back in the 1980s, computer programmers would embed video game code into LP records grooves. You could then play these hidden wonders by recording the LP to a cassette tape and using a tape drive to run the program.

The best part is that The Thompson Twins actually made a video game on vinyl in which you control the twins in a tripped out, text-based adventure game. According to BoingBoing, the game is tough as hell and requires players to keep track of verbs on a piece of paper to figure out what commands work in the game. You know, like “GO TO DOOR” and “OPEN DOOR”, that kind of stuff. If you’re curious as to how these games played, someone was kind enough to port the Thompson Twins game to the web.

Video games hidden in the grooves of LPs