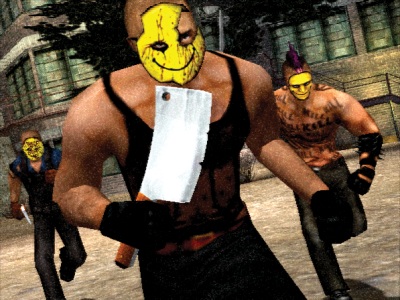 The British Board of Film Classification has banned the sale of Manhunt 2, which was scheduled to come out next month for the Wii, PS2 and PSP. As you might expect, the ratings board cited the game’s encouragement of “visceral killing with exceptionally little alleviation or distancing…. There is sustained and cumulative casual sadism in the way in which these killings are committed, and encouraged, in the game.” So because the game “encourages” wanton violence, it’s banned, censored, never to set foot on British soil.

It’s time people stand up to these pornography peddlers and demand some accountability. Do we really want our children exposed to such filth? How can any decent person defend a game where the main objective is to seek out other human beings and snuff them out? I, for one, want to live in a society that celebrates life and not one that celebrates death. Though I’m sure there will be people who say, “You can’t ban X without banning Y since it’ll create a slippery slope.” Nonsense. The “slippery slope” argument could be the most intellectually bankrupt argument out there.

I applaud the BBFC’s decision to ban the game’s sale in the UK. Maybe if our leaders here in the U.S. had any moral courage they’d follow the UK’s lead on this important matter.