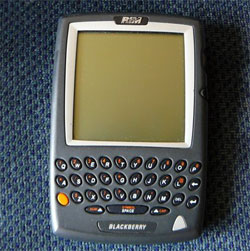 This is not the Curve

I admit it: I’m a Crackberry addict, er, guy. There’s a reason why the BlackBerry has sold so many units. The BlackBerry device by Research in Motion (RIM) is a great portable email device. Initially, the BlackBerry’s popularity started with government and finance communities, but over the years its spread to the more casual email addicts.

The earlier Blackberry (RIM 957) was a stodgy looking unit with email functions only. After a few years RIM combined phone service with the BlackBerry. That BlackBerry looked like a frozen waffle. The waffles weren’t good phones. But, even the lousy phone didn’t stop the RIM’s growth. Then, last year, things changed, RIM came out with the BlackBerry Pearl and the Pearl has some very cool features. The Pearl has a camera, media player, MP3/video, microSD card slot for extra memory, voice dialing and GPS ready map. 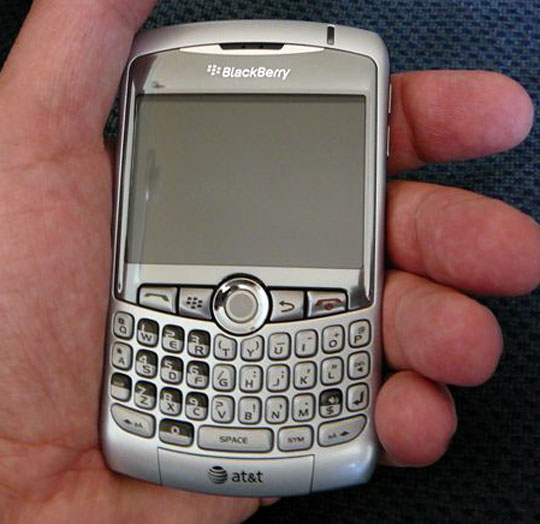 Track ball and keys
With the Pearl, RIM moved past the scroll wheel and went to the track ball. After they released the Pearl for T-Mobile they put out similar models for the other carriers. The Pearl and that ilk are a resounding success but, RIM was hearing complaints about the double letter keys. It had only16 keys and each key had two letters (WQ or ER etc). In spite of that, the Pearl keyboard worked well. They listened to the complaints and came roaring back with a 35 key backlit QWERTY keyboard. One of the first models was the 8800 but there was still a need for improvement. The keys were too close together and there were complaints about the slippery keys. 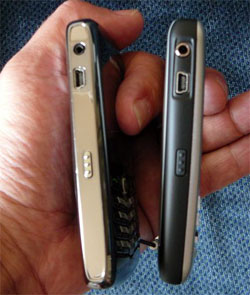 All this brings us to the Curve 8300(where do they get these names, its not curved) which is the closest thing to a perfect Blackberry yet. It features the smallest full keyboard and a nice small form (4.4×2.6.x .5 inches); it’s the lightest (3.9 oz.) and the thinnest BlackBerry. It fits nicely in my hand. With the Curve, a Blackberry with a full QWERTY keyboard, RIM corrected the 8800 keyboard problem by spacing out the keys. Also new to BlackBerry Curve is a spell checker for emails and memos. 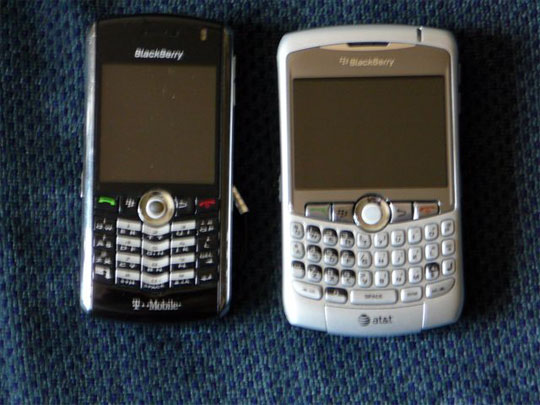 Nice Screen
The screen is 2.5 inches, 65,000 colors with 320×240 pixel resolution. It is backlit and there are also LEDs behind the keyboard which automatically adjust to the ambient light.

Packed with features
The Curve is has an improved two megapixel camera, with 5X zoom. Still I’ve had better two megapixel cameras. Good media features (using the Roxio Easy Media Creator software suite) abound with support for MP3,AAC, MIDI and WAV music files and AVI, MP4, MOV and 3GP video formats with 64MB of on board flash memory. The media player will display album art, title and artist. There is also shuffle and repeat songs. I played music through the Curve’s speaker and surprisingly, it wasn’t bad for a cellphone. The music will stop when a call comes in and resume when the call is finished. The media player is for music, pictures and video (it can play video but not shoot it). Not to be overlooked is Bluetooth stereo audio. It also has a microSD slot and a 3.5mm headphone jack. Web-browsing using EDGE is fast and good, so no complaints there.

No WiFi
Be advised: there is no Wi-Fi or3G support which is definably a drawback. There is a new audio technology that automatically adjusts (increases) the call’s volume in noisy environments. Additionally, it’s supposed to block background noise and echoes, but it was barely noticeable. It did automatically raise in-coming volume when I called a car service to take a very drunk Vinny home from his favorite loud bar. Still the voice (call) quality is OK not great; at times it sounded a tad hollow, no complaints about the speaker phone. Like the Pearl, there is voice activated dialing for your convenience/aggravation.

There is no GPS radio but with a separate GPS receiver connected via Bluetooth you can get the full GPS experience. There is the Blackberry maps application, maps of the US with text based driving directions. There are other applications which you can download. Being a BlackBerry, there is calendar, task list, memo pad, alarm and a calculator. Rated for 17 days standby with a minimum of 4 hours talk time.

This is the One
The Curve is the best Blackberry to date and it is pretty damm good. It is more for the average Crackberry addict than the hardcore government/business customer. If you’re not an AT&T Cingular customer, fret not, other carriers will soon have similar models (with slightly different model numbers). If you were thinking about getting a BlackBerry, but weren’t sure what model to get, or if you should wait, then wait no more. The Curve is the one. The cost is reasonable ($199 suggested with mail in rebates) with a two year contact.