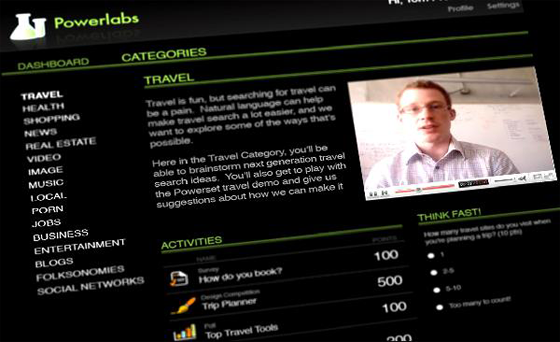 When Powerset announced plans to launch a new service called Powerlabs a week ago, it looked to be another sand box area for product previews, like those created by Microsoft, Google and others.But today Steve Newcomb, COO of Powerset, revealed a lot more about the project. I also saw an in person demo of Powerlabs today and some of the ideas behind it.

Powerlabs is more than a sandbox to show off new product ideas that aren’t ready for prime time. They are encouraging people interested in Powerset to sign up for Powerlabs and create what is effectively a profile. Once registered, users will be able to see new product ideas and vote on them, as well as submit their own ideas to the community. Later on, users will gain points and influence within the community. 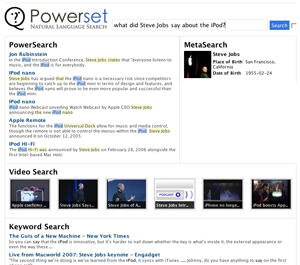 In the demo today the company showed me one idea that they will be putting into Powerlabs once it launches – a mashup of Powerset natural language results along with video results, keyword results and, interestingly, Freeweb results (the two companies are working together). See the screen shot to the right (click for larger view).

Powerlabs hasn’t launched yet, but you can register for it via email on the Powerset home page. They are sending out regular communications to those users, including news at least an hour before its posted on the Powerset blog or given to press. In an email today, Powerset revealed that they have acquired another company, although they did not give any further details.