XM and Sirius are trying to merge (or hadn’t you heard?) but have encountered a lot of resistance in both the government and the press, to say nothing of legions of angry, everyday consumers who are also opposed to it. So the companies bought an advertisement to show just how “diverse” their support is. To see it… 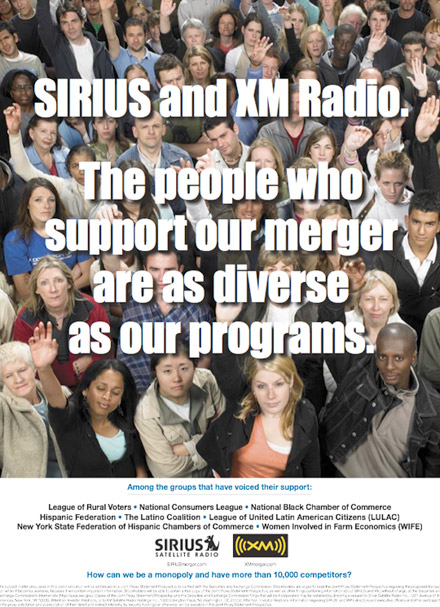 Eight organizations have lent their names to the cause, half of which are Hispanic groups. That’s diverse? But my favorite part of the ad is the final sentence: How can we be a monopoly and have more than 10,000 competitors?

Can’t argue with fourth grade logic, no sir. And just what are these 10,000 competitors? I can think of a few, like the iPod and Internet radio, but that leaves 9,998.

But like our esteemed Josh Goldman said, as long as they don’t charge me more or make me change my radio I don’t care if they merge. Well, if I were a customer, I guess.