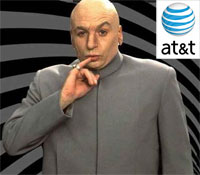 AT&T is to begin working with the RIAA and MPAA in a concerted effort to track down and punish AT&T internet users who download pirated music and movies.

According to the LA Times, AT&T have decided on the move after beginning to sell pay-television services, apparently they now see their interests as being more closely aligned with Hollywood than their millions of customers.

The New AT&T: Go directly to jail and do not pass go?

If there were a death penalty for corporations, AT&T may have just earned it…What a lack of awareness of their relationship with customers. They should do things to reward customers for being smart enough to have chosen AT&T as their Internet service provider. Instead, they would make their customers the stupidest people on the planet, choosing the only ISP that will send you to jail to create a new business model for them. Instead of competing to provide great service at the lowest possible price, they want to drive their customers to financial ruin, for having made the mistake of choosing AT&T

There’s something very, very wrong when a company starts conspiring against its users. Perhaps the days of the customer being always right have passed? Certainly there will be many AT&T customers who will soon looking for internet access from alternative providers