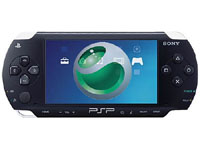 Rumors of a possible PlayStation phone are circulating as Sony files for a patent. Reuters is reporting that Sony Ericsson has filed a U.S. patent application for a mobile handeset with video game features. But the company has said it is not poised to launch a phone based on the PlayStation Portable (PSP) video game brand.

The company hasn’t ruled out such a device, but just said it isn’t ready to make any announcements just yet. Such a gaming phone could be announced next month at the Electronic Entertainment Expo (E3) video game trade show in Santa Monica. It was at a previous E3 event when the PSP made its debut, and Sony, which is reeling from the under performance of their PlayStation 3 and could be looking to make a splash with something unique. Further it doesn’t hurt that Apple has been getting buzz with the iPhone. So we’re watching eagerly!