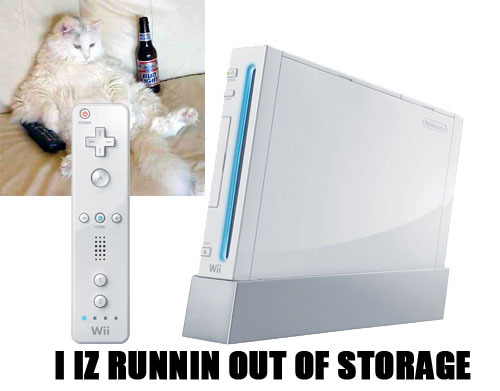 You thought your Wii was truly a special console, didn’t you? Sure it doesn’t play DVDs and it lacks a hard drive, but that’s ok, ’cause the Wii has a remote for a controller! Now Wii owners are finding out the hard way that not having a hard drive sucks. Jake over at 8BitJoystick.com downloaded one too many VC games and realized that his Wii channels were full and his internal storage was almost at its 512MB limit. Ouch.

It’s not like Jake went nuts and downloaded every game on Nintendo’s Virtual Console either. He just downloaded a normal amount of games like any other gamer would. The problem lies in the way Nintendo is distributing older titles. Each VC game not only includes the proper ROM file for the game to work, but it also contains an emulator as well. So when each game you download also has a program coming with it, storage is going to run out quickly.

Nintendo needs to find a new storage solution and fast if it has any hope of not pissing gamers off when they go to download new games, only to find their Wii is fresh out of room to hold them. Sure you can backup to SD cards, but that isn’t practical and it’s also expensive. Perhaps a massive USB storage solution is in the works?

My Wii is Full [8BitJoystick]