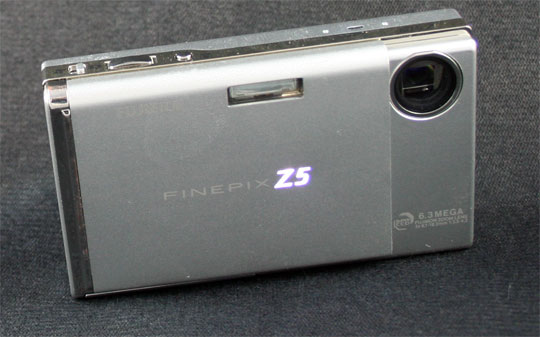 I’ve been watching former film camera manufacturers struggle to grab a piece of the digital camera market for a few years now and, at this stage in the game, I’ve been fairly impressed. Take Fujifilm, for example. Long known for their great film and prints, the former giant has had to contend with digital ninjas like Canon and Nikon while still remaining solvent.

I’ve tried a few Fujifilm cameras over the past year and have seen some disappointing performances. However, I’m happy to say the Z5fd aka the “blogger’s camera” was a strong contender in the ultra-small point-and-shoot market. 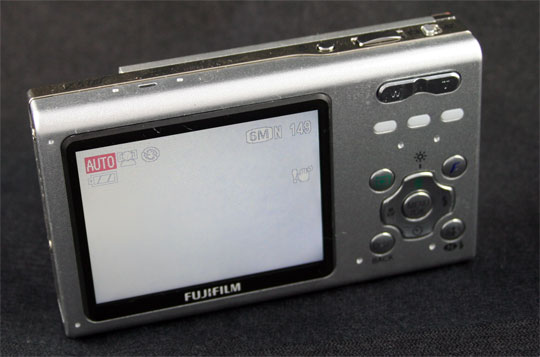 The Z5fd is a 6.3-megapixel camera with 3X optical zoom and a 2.5-inch screen. It turns on almost immediately with about 2 seconds lag between when you slide back the front panel. There’s a little Z5 on the front that lights up when you turn on the camera or take a picture. I piece of tape strategically placed over the logo solves that problem quite handily.

Face detection on the Z5fd is quite accurate and great for party shots. I took this camera to a wedding and, when the images weren’t washed out by flash, the group shots looked just fine. The Z5 supports ISO 1600 for faster shooting in low light and includes picture stabilization that artificially prevents blur in your photos. It also has an intelligent flash system that reduces the exposure and flash power to make images look less blurry in odd lighting situations.

Images taken with the Z5 were fairly bright and detailed with just a bit of noise in visible in out of focus areas. I printed out a few of the images and saw no noticeably egregious problems but the images were slightly washed out in natural light.

One interesting tidbit: the Z5 has a blog mode. This is just a mode that creates a smaller copy of each image, allowing for quick upload to blogs and other sharing services. Big whoop. It’d definitely not better than “Baby” mode which is the bestest mode ever. It’s for babies.

The Z5fd is $229 and comes in three colors. It takes Xd cards, none included, and has 26MB of on board memory. Is it a great camera? No. Is it a acceptable pocketable camera from a company that knows its stuff? Yes.