Earlier this week we covered Trivop, which billed itself as the first video guide for hotels. Today, Tvtrip, another European startup, is launching their own guide. Counter to Trivop’s straightforward mashup of videos and Google maps, Tvtrip is focusing on “experiencing” the hotel and location overall before you rent. And yes, the names are ridiculously similar an confusing.

Tvtrip’s listings include maps, ratings, pricing and videos touring the hotel’s different classes of rooms, amenities, and exterior compiled by their teams of videographers. They have a library of 1500 videos, including 25 European destinations. You can see an example here. Over the next couple of months Tvtrip will be adding several more elements to enhance the user experience, including nearby geocoded Flickr photos and integration with Eventful and Plazes. I’m sure they’ll be adding more imaging features as mapping services like Google incorporate them, such as streetside view. 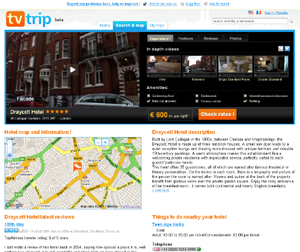 Tvtrip does have some drawbacks, however. In depth information about hotels is great news for price insensitive consumers, but you still have to hop to one of their affiliates for the best deal (Expedia, Venere, Booking.com). Competitor Trivop, instead, relies on TripAdvisor for their deals. Video guides also take a great deal of time to put together. Tvtrip is also only available in London, Brussles, Paris, and Berlin because of the large overhead involved in compiling the in depth information. Trivop is currently only available in London and Paris.