Facebook Polls launched Friday night with a fair bit of fanfare. It’s a tool with a wealth of possibilities but be warned: don’t mention the competition in your poll questions! 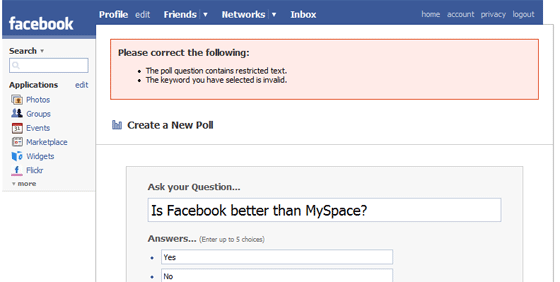 What about the direct competition?

So is Facebook better than MySpace? Whereas News Corp blocks widget providers, Facebook blocks free speech. I know which one annoys me more. Let’s just hope it’s not a sign of things to come.

Update: A Facebook representative responds in the comments, saying “Some outdated code was used that should not have been. When we learned it was blocking those words, we fixed it. We regret the mistake.”