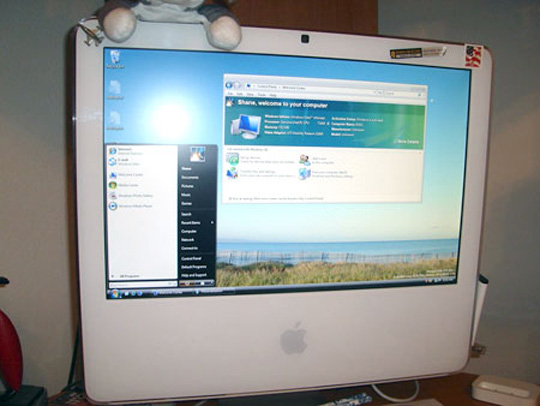 [Update, 05-31-07, 2:37PM PST] So some other famous bloggers and I were discussing this unlikely rumor, and we started to realize something: With core elements of Vista in place on Intel hardware, it wouldn’t be much of a stretch to imagine OS X running Windows apps. Then, by chance, I ran across this article at Mac Daily News posits the very idea, and that this could be the way big secret Steve is keeping for WWDC. Bootcamp 2 isn’t in the current preview of Leopard, nor are many other expected toys. We still think the whole thing is a little suspicious, but what a possibility it creates, no?

This is probably the most insane Apple rumor we’ve ever heard, and most likely crap. But in the interest of generating site traffic, and to secure bragging rights of being “first!” if it’s somehow real, and because we’re reckless, we bring it to you now.

Our Trusted, Reliable Source™ at the WSJ’s D conference that fed us all the Foleo goodness was chatting with some other PR types who work for Apple during Steve’s chat yesterday. He/She said they were nervous over Mr. Jobs accidentally spilling Leopard secrets two weeks before its official unveiling at WWDC. The source said something jokingly about how it’s really a re-designed version of Vista, and, to their surprise, the PR type said, “No, Vista runs great on the new Macs by itself, and Bootcamp 2 lets us ship it as an add-on option for dual-boot.” Or something to that effect.

We’re thinking the Apple PR person was messing with our source, the idea is to run ideas up the flagpole to see if they fly. We really don’t see any Macs shipping with dual-boot to Windows anytime soon, but Steve has surprised us before, so who knows? We mark the likelihood as very low, but stranger things have happened. Thanks for giving me something to post on a slow news day, Apple PR dude/lady!