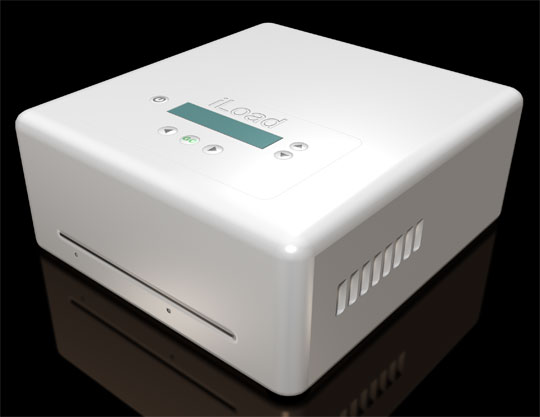 In the simplest terms the iLoad by Wingspan transfers your CDs onto your iPod without using a computer. No computer, no iTunes, nada, zippo, nothing. Potentially it’s a useful product that addresses a need of those who want an iPod and don’t want to use or aren’t comfortable using a computer. When you think of it, who won’t want to load their CDs directly onto their iPod, bypassing the computers? This obviously presumes you still own CDs.

Buying music from iTunes gets expensive. I personally load CDs and sprinkle purchased tracks into the mix. So if your iPod’s music is mainly CDs, then the iLoad makes sense…kind of… but consider this, in a world overrun with dedicated iPod accessories and trust me on this, there is a plethora of every conceivable iPod accessory out there, then when is enough, enough?

Set-up
Out of the box the iLoad has some size, approximately 3 ½ inches high 7 inches long and 8 inches wide. After connecting my iPod to the iLoad, the iLoad asks to be introduced to my iPod, which is cute-speak for installing a program onto my iPod. It only took 7 minutes. Upon completion, I discovered that the software changed my iPod’s artist menu. Now it’s in alphabetical order by the first letter, not the artist. So, the group ‘’The Knack’’ is not under K anymore The Knack is listed under T for the…Hmmmm.

Transfer
The iLoad comes to me a good time, because I have a bunch of unopened CDs lying around. Taking out Moby’s Hotel I stick it in the iLoad, press GO and it takes care of business. The copying speed of Moby’s CD is similar to PC transfer about 5 times the normal CD playback speed. Nice and clean, iLoad transferred the music, album and track particulars but with one drawback; iLoad is noisy. For a moment I actually thought something was wrong with the iLoad but no, it’s just the way it is…one noisy machine

There is an Ethernet connection for downloading album art, track title and artist particulars for those occasions when the CD that’s being copied doesn’t possess that information. iLoad updates (firmware) are available via the Ethernet connection for registered users. It is my understanding that DVD-to-iPod and video downloads are slated for the future.

Backup
I backed up the contents of my iPod using an external hard drive. This is good because remember, with iLoad you’re not using a computer. If you lose or damage your iPod, then all its content, music, pictures and video is safe on the external hard drive. There is also the option of using a flash disk for back-up. The use of external backup is always a good idea, iLoad or no iLoad. Any computer’s hard drive can die or get a virus. Also, if you have a lot of content, then consider all the space you are freeing up on your computer.

Other options
Using iLoad you can delete music from your iPod by title or even category. A category such as least listened to or oldest added. The iLoad’s LCD screen has intuitive right and left arrow buttons to control everything including erasing tracks from your iPod. Transfer from one iPod to another iPod is also possible. The actual iLoad unit can be used as a player using the audio output jack. iLoad works with all iPod products manufactured since 2002 which include the shuffle, Nano Video iPod and the iPod phone

Is there an audience?
The quick answer is yes, but this product isn’t for everyone. The iLoad addresses the issue of loading music and backing up all your music. The real market for this product is the iPod owner who doesn’t want to use their computer. This begs the question how many people would that be? And then there is the price; at $299 it’s an expensive solution.

Borderline at best, I ask; Is this a solution to a problem or solution in search of a problem. The thing works, but because of price, noise and what I see as limited appeal, the iLoad is a sub-average iPod accessory in an already flooded market.