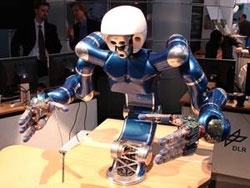 While robots aren’t my “thing,” I do appreciate the never-ending march of science. (Well, not really, but it’s irrelevant in any case.) In Europe they’ve got a little robot project thing set up called Sensopac, where one of the goals is to implant a man-made cerebellum into a robot. (The cerebellum controls movement.) The point of implanting a cerebellum into a robot, which, I hear, is the premise of a new ABC sitcom this fall, is to better understand diseases like Parkinson’s.

Up next on Sensopac’s docket is creating artificial skin for robots. See, robots are dumb.