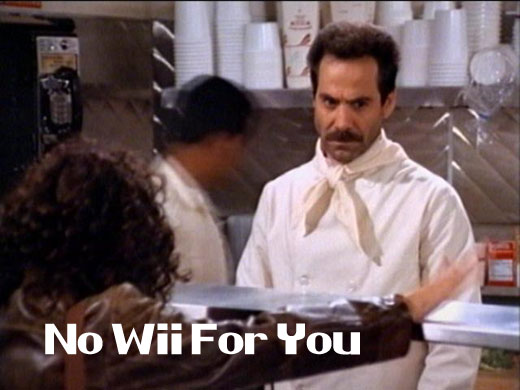 Hating on the Nintendo Wii seems to be the local raison d’être, but the numbers don’t lie: many of you love to wave that Wiimote around like it’s 1999. Sure, OK. But, alas, if you don’t already have a Wii, prepare yourself for more agony. One of those financial outfits—Lazard Capital, to be exact—predicts that demand will outstrip supply for Nintendo’s GameCube 1.5 (ZOMG no he didn’t¡).

In other words, Virginia, if you don’t already have a Wii, you’re pretty much screwed. All this, of course, despite Nintendo’s bestest efforts to increase Wii production. ::Tear::

Lazard Capital predicts that the Wii will be harder to find than Biggs’ remaining shreds of dignity right through the holiday shopping season. Like that episode of Seinfeld, no Wii for you. Next!

But worry not, there’s plenty of things that you can do with your life other than playing “Wii Sports” or whatever. You could, for instance

Lazard: Wii Shortages Through 2007 [Next Gen]