Particls is an alerts platform that conveys attention data. Particls evaluates incoming information and ranks it based on “Personal Relevance”. Particls then uses an “Output Adapter” that provides only the amount of attention required for the relevancy of the alert based on a policy of “Diminishing Attention Consumption”.

In layman’s terms, Particls displays news it thinks a user will be interested in based on history, feeds and a list of keywords. Think a smart RSS reader that scrolls on your screen.

Setting Particls up is fairly straight forward. Buttons are immediately integrated at a browser level and adding feeds, keywords and filters is simple. Customization options are extensive but are not for the non-geek inclined; there’s too many options and it’s raw data driven, no user friendly WYSIWIG color charts or sizing options.

The results are exactly as promised. Items of interest are scrolled based on your attention preferences, and the ability to tweak priority allows for extensive filtering that delivers relevant and topical news.

Particls offers free API access to developers and publishers are able to customize Particls with co-branding and site specific data. For those interested in trying Particls a TechCrunch flavored version is available for download here, Windows only at this stage though a Mac version is planned.

Whilst the technology behind Particls alone should make for a compelling service, the format is not going to be for everyone. Tickers are a love them/ hate them thing with little middle ground. For those on the love side of the ticker debate, Particls may well become a must have for the desktop. 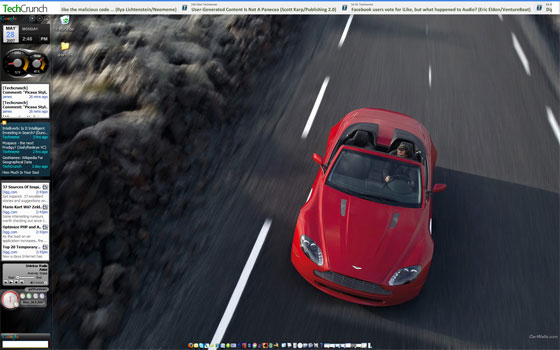