Online photo editing continues to be a hot market. From Flektor, Slide and others with a MySpace focus, to Adobe’s development of an online version of Photoshop later this year, there’s a lot on offer or soon coming to a browser near you.

Seattle based Picnik has grown an audience without gaining much attention. We previously covered the site in February as part of an overall market review. Facebook’s F8, the Facebook as a Platform service is going to change market awareness of Picnik, Picnik being an early content provider to Facebook’s millions of users.

Picnik is a user friendly service. It’s avoids the cutting edge, youth market focus of sites such as Flektor, instead delivering what can best be described as a web based version of Picasa aimed directly at the mature end of the market. Moms and Dads, to Generation X users who are tired of the trendy graffiti style “hip” focus of other services will love Picnik.

Picnik is quick, clean, easy to use and comes complete with built in support for Flickr, Picassa Albums and Facebook albums. Registration isn’t required to use Picnik. It simply works, and works well.

Since F8’s launch last week, Picnik has added an additional 50,000 users and according to co-founder Mike Harrington is now the third most popular service in this space behind Flektor and iLike. The site remains in independent ownership but with this level of functionality is bound to be an acquisition target in the future. Give Picnik a try then imagine Picnik’s photo editing functions natively in Flickr; I’d like to see that! 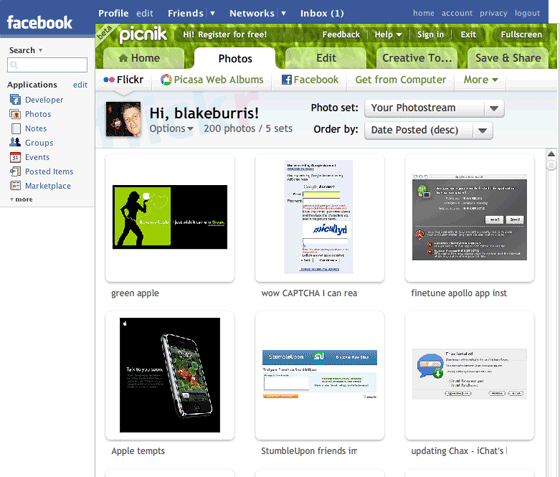