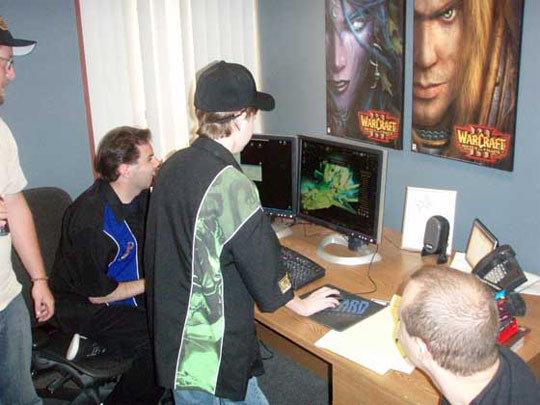 Ezra creates his own world at Blizzard’s studios

Normally I’d hate on Blizzard for the constant downtime that occurs when a patch is rolled out in World of Warcraft, but after reading this article, I have a newfound change of heart. 10-year-old Ezra Chatterton has a life-threatening brain tumor which gives him massive headaches and has required major surgery. The Make-A-Wish Foundation set up a meeting with Ezra and Blizzard and let the boy get all the WoW he could handle.

Ezra got way more than he expected. He sketched out characters, wrote down stats and items, and went into intricate detail of what he wanted to do. When he arrived at Blizzard’s studios, he was absorbed into a whole other world. Ezra got to provide a voice for his character in a recording studio, he designed a new weapon, created a new quest, and even got to use a special one-of-a-kind crossbow that would do major damage. In a nutshell, this boy got to do everything us gamers dream of day in and day out.