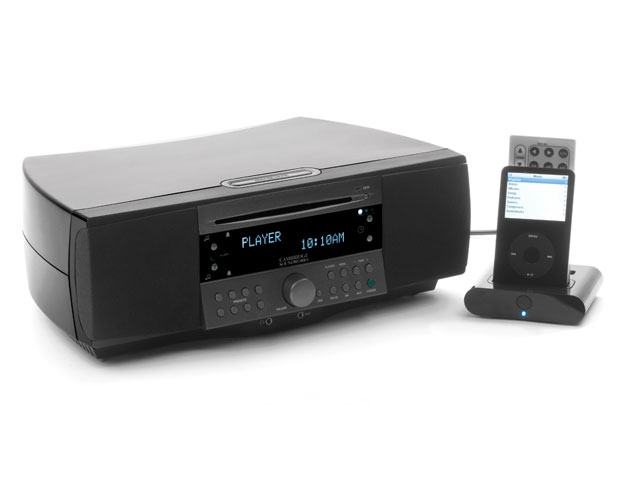 iPod clock radios are a dime a dozen, but renowned speaker maker Cambridge SoundWorks supercharged theirs with beefy sound and a built-in CD player. The all-in-one CSW Radio CD 745i has sophisticated looks (in black or white), thanks to a bevy of on-board controls. We got our hands on one and nightstand-tested it for a week, and it was no letdown. The features, compactness, sound, and power offset the few minor quirks to make this a satisfying way to make your iPod rock out with its clock out, even at the hefty MSRP of $399.

Cambridge SoundWorks packed tons of stuff into a 2.1-channel speaker enclosure that measures 5 1/4 inches high by 14 inches wide by 9 3/4 inches deep. Of course, it weighs about 12 pounds, thanks to the built-in subwoofer and integrated power supply, and you’d better have a decent-size nightstand.

Attaching the iPod dock is a matter of plugging in a 3.5-mm and a 2.5-mm cable to the appropriate ports on the back of the speaker. (The 3.5-mm jack can also be used for another line-in source.) The back of the iPod dock has connectors for composite and S-Video, and there’s a slot on top for the remote, as well as the universal dock. You can also attach the included AM loop and FM antenna for better radio reception.

The 745i’s front bezel may seem like a cockpit with all the buttons and labels, but it’s actually pretty simple to use as long as you can read the tiny labels next to each button. Just above the LED display on front is a slot-loading CD player, eject button, and a green CD indicator. Pairs of buttons on either side of the screen control the alarm and clock functions, and 17 more under the screen control the slot-loading CD player, AM/FM radio, and iPod functions. That’s a lotta buttons!

Using the buttons on the front is easy enough, though I’d rather have larger and more distinct buttons for mornings when I’m not quite firing on all cylinders. At least the most important button (snooze/mute, what else?) is big enough and conveniently located on top. The IR remote’s control layout could use some tweaking, and you lose some granularity of control compared with using the speaker’s buttons.

On default settings, the sound is very full and rich thanks to the subwoofer, and you can use the Jog menu to tweak the bass and treble and get the sound balanced just the way you like it. Overall, I didn’t find significant difference between the sound from a CD and that from an iPod (using Apple Lossless files).

With a roughly 14-inch span between the speakers, you really can’t get a whole lot of stereo imaging, but the “wide stereo” mode does manage to add a little more space between the speakers. It’s a more subtle change than with some other iPod speakers with the same feature, however.

The dual alarms are very flexible; you can wake up to a CD, radio, or tone, and you can set the alarm volume and snooze length for both alarms independently. I was a bit miffed that you can’t wake up to your iPod, though–it’s an odd omission in something this pricey.

I like that you can even load in a backup battery (good for about 2 days of power) just in case you forget to pay your electric bill face a sudden outage. Setting the alarms via the remote’s awkwardly arranged blister buttons is a pain, but doing it via the buttons on the speaker itself is fairly simple.

I was surprised at the strength of the AM and FM tuners; after experimenting with antenna placement a bit, I was able to get amazing reception even with fringe stations in New York City. The slot-loading CD player also works well and handles CD audio, MP3 CDs, and WMA CDs. Perhaps best of all, it automatically pauses when you switch modes, resuming from where you left off when you switch back to CD mode.

At nearly $400, the 745i is in a class with high-end table radios and all-in-one audio minisystems. Cambridge SoundWorks did a great job on the sound quality and features–they’re arguably worth the price, though I really wish usability were better and that you could wake to your iPod like with JBL’s On Time. If you can live without the CD player, there’s also a cheaper model; the $299 735i is otherwise virtually identical to the 745i.