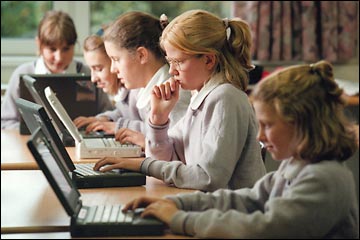 W-Fi could be a lot more dangerous to children’s health than previously thought, says a British health agency. The guy behind the call to arms, Sir William Stewart, points to evidence that shows signal strength from a Wi-Fi router at a distance of one meter is stronger than a cellphone tower’s at a distance of 100 meters. Or, in something I like to call “English,” Wi-Fi signals are a hell of a lot more powerful than cellphone signals and therefore could pose more of a threat.

I wonder, if it’s discovered that Wi-Fi is indeed detrimental to one’s health, what would happen? Would the industry just collapse in on itself or is the basic technology modifiable so as to eliminate the danger? And what of those people who are sensitive to electromagnetic waves already, are they screwed either way?

I wonder if in a few years’ time, Future People will be all, “Can you believe they willingly subjected themselves to radiation without studying its effects?”

Wi-Fi risks in schools ‘must be reviewed’ [Telegraph]