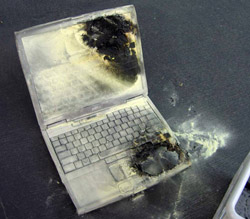 Who’s ready for another round of exploding laptop batteries? I’m sure everyone remembers that whole scandal last year where Sony laptop batteries were exploding left and right, leading to recalls and plenty of awkward moments for Sony. Well reports out of Japan suggest that one of the Sony batteries part of the Toshiba’s recall program caught fire back in April. Allegedly this incident isn’t related to the previous battery fires, but instead was caused by some other manufacturing oddity. Still, I bet neither Sony nor Toshiba especially want to be associated with these types of stories anymore.

Damn, yet another post-fiasco battery mess. Where’s Ralph Nader to get them to clean up their act?