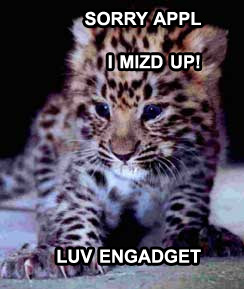 Bloops. After following up on a false lead — essentially a faked internal Apple email — Engadget’s Ryan Block drove Apple stock down 2.2 percent. Let that be a lesson to all of us: just because it says @apple.com at the end of the email doesn’t mean it’s from Steve.