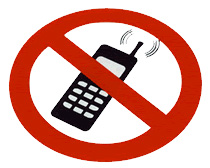 Hear that? It’s the sound of silence. (No, not that.) For the first time ever, people made less calls on their cellphones than the previous year. Researchers tagged folks who use pre-paid cellphones and found that they made 28.5 percent fewer calls than last year, the first time that’s happened in the ten years since they started keeping track. Possible reasons include people migrating to mobile IM and e-mail (because these services are usually cheaper) or people just “getting over” the fact that they can make calls on-the-go. The novelty may be over. Good riddance.

I really do hope that this is a sign of things to come and not a data outlier. How many times have you had a movie interrupted (or, for the betrothed, dinner with your spouse) because some blockhead decides that he has to talk VERY LOUDLY on his cellphone? Not only is it plainly uncivil, but it’s infuriating to no end. Hence, I don’t go to movie theaters unless it’s A) Tuesday at 11 a.m. or B) coerced by John.

Just think of it… a world without cellphones.