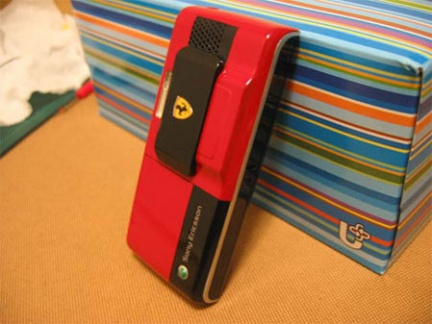 We all have that one friend who was really cool, but, ya know, changed. They were reliable, solid, always there for you, in good times and bad. You thought you knew them, but then out of nowhere, you blink, and they’re entirely different. For some of us, it’s an ex. For others, a childhood playmate. For me, it’s Sony-Ericsson.

SE is about as good as cellphones get to Yours Truly. The company makes solid phones with a great interface that are sturdy, bug-free, and just plain there when you need them. But SE, dude, you’ve changed.

Friends, Sony-Ericsson has gone Ferrari. Red does not translate well to SE, nor does the yellow shield. Ferraris are cars, friends. They’re not phones. We’re sad that SE has bought into this crap. It’s not the phone company we’ve known through six handsets. Mine were black, black, charcoal, silver, black, and grey. There was no red, nor should there have been. You’ve changed, Sony-Ericsson, and I don’t like the new you.

Yet another Ferrari phone (sony-freakin’-ericsson) [Textually]