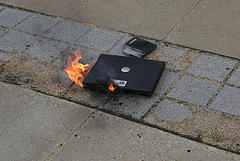 Strike up a match, light the candles, and welcome another member to the exploding laptop club. After an Acer laptop exploded in someone’s lap recently the company decided to make the move to recall 27,000 laptops due to overheating batteries that were made by — get this — Sony. Hmmm, between Dell, Sony, and now Acer’s exploding laptops, maybe using Sony-made laptop batteries just isn’t the best idea.

You can check the list of affected models right here to see if your notebook is going to kill you in the next few days. Acer recommends using your AC adapter until they get you a non-exploding battery. Great advice, Acer. Maybe we should all just get desktops.

Acer Laptops Catch on Fire, Get Recalled Too [MobileMag]