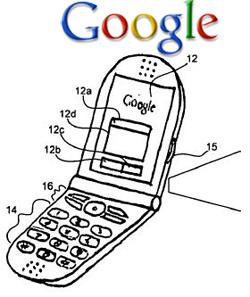 Stop living your life for just a second because we have a possible release date for the rumored Google Phone: late 2007. Supposedly the phone will be manufactured by HTC (they make the Dash, among others), which will have more than one million Google Phones (GPhones?) by the end of the year. This news comes to us by way of DigiTimes, the Taiwanese tech-oriented newspaper that often gets stuff wrong.

It’s said that the phone won’t support GPS, but will support EDGE (lame) and will integrate with Gmail and Google’s lovely search. This drawing is from a patent filing, not something I drew on a napkin at the local Wendy’s.