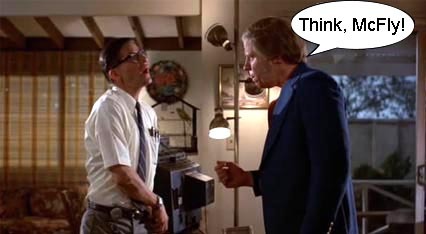 People have been clamoring for WiFi-enabled music players for a long time now. But current offerings from Archos, Microsoft, and SanDisk make it seem like they’re all just taking weak jabs at Apple, like when George McFly goes to deck Biff in Back To the Future and just lands a wimpy blow on his shoulder.

The big blunder is simple: keeping social WiFi (sharing music) and productivity WiFi (browsing, email) apart like two fighting kids. I may not be the sharpest spoon in the drawer, but even I can figure out that you can only score a truly big hit by incorporating both.

By leaving out half of the equation, companies are just throwing Apple a great big softball. Of course, whether Steve Jobs can manage to make the iPhone and its equally-important phoneless iPhone stripped-down sibling not suck is another story.

All Apple has to do is let the iPhone run Safari competently and make the device compatible with the Bonjour protocol so you can share music across devices and computers running iTunes. After all, what’s the difference if you’re accessing a nearby iTunes library with your laptop or with your music player?

Aside from the fact that Microsoft missed the boat on any kind of productivity uses for the Zune (ironic for a company that makes Internet Explorer and MS Office), over-restriction with sharing is what will ultimately kill the Zune.

Still, I admire Microsoft’s ballsy (though admittedly ill-fated) entry into the playground, and as I’ve written before, I think MS has a great shot at eventually getting it right with future Zune products.

But now Microsoft has a big hurdle to overcome: the reputation they’ve created with a crippled not-ready-for-prime-time product.

I recently spoke with Eric Bone, director of audio/video product marketing at SanDisk, about the company’s new Sansa Connect, which — like the Zune — focuses entirely on the sharing equation but with a twist that actually brings it close to being a real winner.

The Connect integrates with Yahoo in such a way that it gives you access to your Yahoo Messenger friends — but only for sending song recommendations. Why they couldn’t throw in some email or messaging functionality? (Don’t talk to me about screen size… I use my phone to check my Yahoo email account now, and I can still see straight. But I have to pay for it in airtime, which sucks.)

Bone talked about SanDisk’s gradual, cautious entry into the premium music player market in the last year or so, beginning with the Sansa e200 series. Fine — they bunted and got a triple out of it.

But SanDisk is still waiting for an intentional walk with the bases loaded, even though they’re down by a lot more than one run. It’s time to be Robert Redford in The Natural and try to smash the stadium lights.

Archos is a different story. They just don’t quite get what the US market wants — they’re based in France and seem to cater to a very small elite audience. The company doesn’t seem to realize the potential of its products, from the very first Archos Jukebox all the way to the 604 WiFi. Of course, it doesn’t help that Archos doesn’t have much in the way of marketing dollars either.

Face it: Release mediocre or half-baked products intentionally and that’s how people remember you, if they remember you at all. Take a mighty swing, and at least you get people’s attention, even if you strike out.

Don’t get me wrong — I’m not an Apple hater — but I was definitely a bigger fan when they were the underdog. Now there’s a different underdog (okay, everyone but Apple is the underdog), and I can’t help but root for them.

It really steams me when companies wuss out by not trying to knock one out of the park, especially when the winning formula is so crystal clear. Just remember, SanDisk et al: Steve Jobs can smell your fear.

Remember: In Back To the Future, Biff laughs off George’s McFly’s first failed punch, but while he’s laughing, George pulls back and knocks his smug, gloating ass out with one shot.

(Sorry, no illustration this week… Leah’s busy and I’ve been watching too many 80s movies and Mets games.)