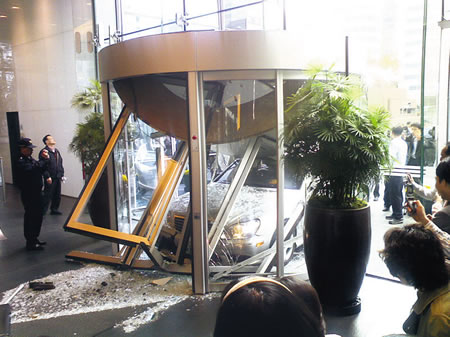 Disenchanted with his cellular service, a Korean man decided to take an interesting and unconventional approach to retribution. After trying unsuccessfully to get SK Telecom to fix his device he decided to drive over to SK offices. The problem is, when he got there, he just kept driving — right through the front of the building.

Actually, that’s not entirely true. First he parked and put signs on his car that read “Delinquent SK.” He then attempted to enter the building but was stopped by security guards who asked him to move his car. As you can see, he complied to the request, but probably not quite in the manner the guards had had in mind.

Now you probably can’t tell from the picture, but that car is a Mercedes S500, which runs about $90,000. I know cellular companies can be a total pain in the ass, but this route (get it?) seems less than productive. What’s more, for someone who can afford an S500 to be crying about a cellphone seems, well, crazy. I guess that’s it. We can just discredit this as the actions of a crazy man.