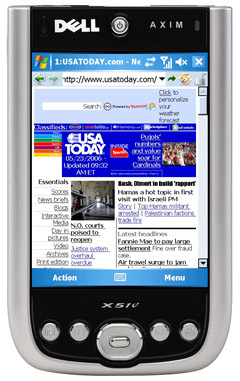 Look at that headline! So much humor contained in such a small sentence! Anyways, yesterday Dell announced that it would no longer be producing its Axim line of PDAs and the company has no further plans to do a follow-up product. If were like every other site on the net, we’d give you the history of the Axim, but CrunchGear cuts straight through the bull to deliver the facts you want. Thanks us when PC Magazine comes out with the “Axim: We Hardly Knew Ye” special edition.

So. Do you know why the Axim is being killed off? It’s because no one uses PDAs anymore. They’re dead, have been dead, and were dead 3 years ago. Why use a PDA when there’s the Blackberry or the ability to sync your phone with your computer? No need for two devices. Plus with the iPhone looming ahead, I’m sure plenty of PDA manufacturers besides Dell are starting to bug out.