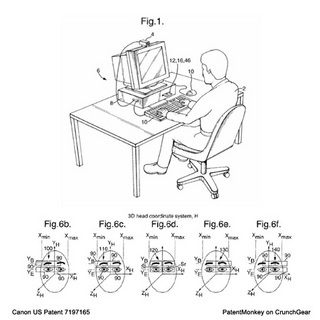 In watching the growing interest in web tracking, with players like clickdensity combined with analytics to fine tune preferences, we thought Canon’s recently received patent covering the use of image data to track eye movement on a computer screen quite interesting.

Canon has a deep history in eye tracking technology and filed on this technique to determine head position and then gaze position to then know what a person is looking at by transferring 2D data into a 3D computer model. Further, the model can then track frame to frame changes to facilitate “reliable and accurate eye tracking.” 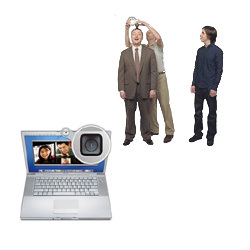 Knowing that Apple has integrated cameras into their laptops, iMacs and have iSight for monitors, this invention appears primed to bridge the gap for allowing computers to sense attention on specific elements of a screen or even if there is attention on the screen instead of away from it. How could this be used?

Example: Microsoft US Patent 6618716 – Managing the Transmittal of Information
Microsoft has been developing various predictive models that attempt to optimize user efficiency by determining the optimal periods to deliver messages based on a number of attributes. Clearly, attention to a screen as well as on a specific computer task, such as when doing a Google search (distract with Outlook email) versus writing out a letter in Word (leave alone) has the potential to enhance productivity.

The reference listed for this patent are worth noting as this isn’t the first attempt at digital eye tracking and surely won’t be the last. A fine point for Canon is that they are “determining eye positions in the three-dimensional space in dependence upon the relationship between the generated representative image values for different search regions.”