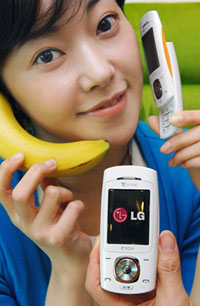 People have called the LG SV80 a banana phone — clearly they’ve never seen a real banana phone before. LG believes that the SV80’s shape make it more ergonomic. They’d better because the shape is the only thing that makes it interesting. The stats look like a cellphone from 2005: 1.3-megapixel camera and a paltry 142MB of built-in memory. It’s only for Korea right now (big surprise there), and frankly, I don’t know if Americans would want to be see walking around with such a strange looking cellphone.