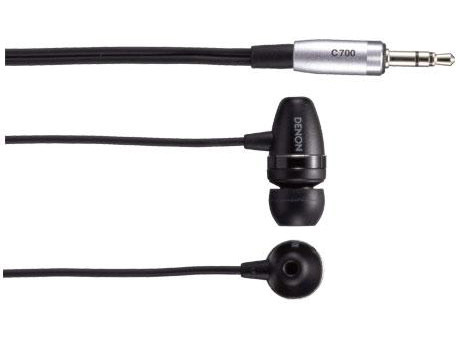 Denon finally returned to the consumer headphone market, and they’ve made a big splash with their latest offerings. I spent some quality time with the AH-C700 (available in black or silver), and the upshot is that I’m not going to wait 2 days to call. They’re not cheap dates, though, at about $200. But they have such nice extension in both the bass and the treble that they rival similarly priced favorites from Etymotic and Shure, and they’re pretty tough to beat on comfort and build quality.

The bullet-shaped earphones have sturdy aluminum housings and symmetrical cables that are just rigid enough to resist tangling (there’s no anti-tangle slider though). The cables terminate in a gold-plated 3.5-mm miniplug that’s set in a small aluminum cylinder; where it comes out of the cylinder, the cable is protected by a short rubber sleeve, which means that part of the cable isn’t likely to wear out or fray from being tossed in a backpack or pocket. 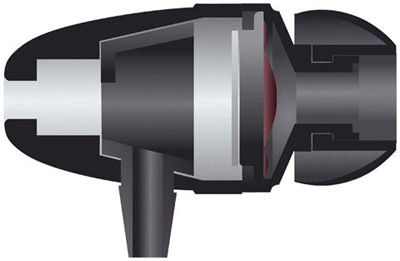 The fit is nearly identical to that of Sony’s popular MDR-EX series–comfortable and relatively nonintrusive. They don’t block out as much noise as Shure or Etymotic earphones, but they do a decent job at saving you from hearing every detail of those drunken inane conversations on the subway.

One thing that’s of some concern is that the large hole where the sound comes out is covered by a thin fabric filter that’s very exposed and thus prone to getting dirty or clogged. I’ve mangled fixed several pairs of Sony EX-71’s, which have a similar design, by using a pin to pierce the filter when it gets so clogged that sound stops coming through. But while that’s fine for a $50 set of ‘buds, I’d be wary of doing that with a $200 pair.

Strangely, Denon missed the mark in the accessory department. Ultimate Ears has the metal “squircle” case, Shure has its zippered nylon case, and Etymotic includes a soft pouch. Included with the C700? Nada. Not even so much as a quarter-inch adapter or cleaning tool, though you do get some extra silicone tips. The lack of a case also adds to the danger of damaging the exposed filters.

The C700’s sound quality makes up for other shortcomings. I tested them against other single-driver headphones at various price ranges, including the Shure E2c, Shure E3c, Etymotic ER6i, Etymotic ER4P, and Creative Zen Aurvana, and the Denons stacked up very well. The Denons came in behind only the Ety ER4P in terms of detail and bass response, though every other model blocked out way more ambient sound.

The Denons have excellent extension in the bass register, though I can guarantee some folks who are deaf as a post from listening to hypercranked iPodswill complain that there’s not enough bass, but it really is there–you’ve just got to get a good seal between the silicone and your ear canal.

They really shine, though, in the upper register, with sparkling highs and a nice lively sound for acoustic music. You’ll hear it most in music with a lot of dynamic range–sudden cymbal crashes can be downright startling. The mids aren’t honky or recessed; they’re just a bit up front, so vocals really pop without being out of balance.

The rated electrical impedance of the C700 is 16 ohms, which means any music player will have no trouble driving them. I used a 30GB video iPod, and I rarely had to turn it up past around two-thirds of the way up for a satisfying listen in a café–a bit more on the subway, and a bit less at home. For efficiency, the Creative Zen Aurvana is tough to beat (partly because they blocks out so much noise), but the Denons do pretty well.

If you want thumpier bass, go dual-driver (Shure SE420, UE super.fi 5 Pro). If you want accuracy for seriously critical listening, the Etymotic ER4P or ER4S is a better fit. But if you’re looking for well-balanced high-definition sound and don’t want to be completely isolated from the aural landscape around you, the Denon AH-C700 is a very good–but pricey–choice. The Denon’s comfortable fit and solid construction are nice bonuses, but you’ll have to DIY your own accessories.