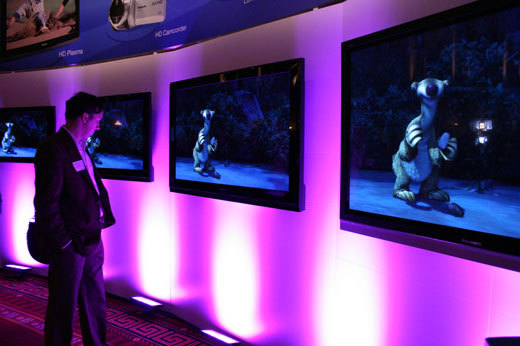 Like I mentioned, Panasonic visited Gotham yesterday to show off its plasma TV lineup for the year, including its first 42-inch 1080p model that’ll be available in June for $2,500. (Wow, run-on sentence alert.) Panasonic displayed many of these plasmas at CES earlier in the year, but it doesn’t hurt to get some one-on-one time with them without throngs of people pushing up against me.

There’s nine new models for the year, with two more carrying over from 2006, including the 103-inch 1080p giant. All models have at least two HDMI ports, an SD card slot and a new anti-glare coating. The highest end models can decode h.264, so you can load up an SD card filled with similarly encoded movies and watch them on the big screen. Of all of the presenters yesterday, Panasonic’s engineer was the most dynamic (top execs usually don’t speak so well), explaining how the new plasmas are better suited to handle fast moving images (think sports) than LCDs because they don’t smear the image as much. Also of note is that Panasonic teamed up with GalleryPlayer to let you view high resolution works of art on the TV. For a wannabe snob such as myself, that’s a generous perk.

The boys and girls over at Crave actually tested out one of the new plasmas and generally liked it, with the caveat that, for some reason, the color green didn’t look quite right.

Image graciously stolen from Gizmodo because my camera broke