Need an ultra-slim MIDI controller keyboard for laying down quick tracks while you’re on the go? Or perhaps you’re looking for a small, inexpensive keyboard to complement your full-size home studio rig. Either way, the M-Audio 02–the followup to the company’s successful Oxygen 8 keyboard–isn’t the most advanced 2-octave controller out there, but it’s a solid choice, and you can find it at places like J&R for around $100. (Don’t be freaked out by the $179.95 list price; only total newbs would pay that much.)

This thing is impressively compact, at just 1.5″ thick by 17.5″ long by 8.5″ deep, so it slips easily into a backpack. The 02 weighs in at about 3 pounds, which is right in line with most other 25-key models. It’s got a three-digit LED screen and eight fully assignable control knobs plus one assignable rubberized button beneath each knob. Five more buttons control various presets and programming functions, and there are rubberized two-way buttons for octave shift/transpose, modulation, and pitch bending (the last two are also assignable). An assignable fader controls volume by default. The overall layout is very clean and practical. 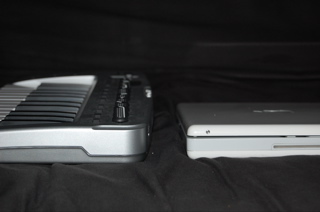 On the back of the 02, you’ve got an on/off switch, a jack for an optional programmable footswitch or sustain pedal, a MIDI output (in case you want to save a USB port or use it with another MIDI device), a USB 2.0 port, and a 9V DC jack (for use with the optional AC adapter). The 25 keys are half-action, meaning they don’t go down very far, so they let you play pretty easily and fast. Of course, if you’re used to a real piano, this kind of action can drive you a bit nutty.

There are five presets stored in the 02’s internal ROM: General MIDI (GM), Reason (native), Reason (mixer), Yamaha/Roland, and a MIDI CC. Which preset you use depends on what recording or sequencing software you’re using; I tested the 02 successfully with GarageBand and Logic Pro 7 using the GM preset, and the 02 worked flawlessly with Reason using the Reason (native) setting. You can adjust the order of presets too, in case you’ve got a more elaborate equipment/software setup. The package includes a copy of Ableton Live Lite 5, which is reasonably easy for beginners to get started with, as well as Enigma for managing and storing your different MIDI setups.

The beauty of MIDI controllers is that most of the controls are assignable. It did take me a couple of quick passes through the user manual to figure out how to do things like change the degree of pitch bending and make knobs control various common functions; the documentation is fairly good if a bit too generic (software-specific help would have been nice). 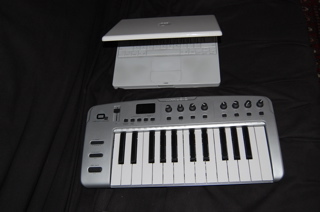 I realize size was a major consideration in this keyboard’s design, but I much prefer wheels to rocker buttons for pitch bend and modulation. The construction is definitely plastic-y, but I’ve been banging the hell out of it for a couple of weeks and taking it with me for impromptu jam/recording sessions, and it hasn’t fallen apart yet.

The action on the velocity-sensitive keys is very low, but I got used to it very quickly. One thing I found conspicuously missing, though, is aftertouch–a feature that comes in very handy when you create expressive sounds like string or woodwind pads, or if you’re playing multiple simultaneous parts. If this is critical to your playing, you’ll want to stay away from the 02.

Overall I’m pretty happy with the 02; it’s an affordable, slim, and relatively simple MIDI controller that’s reliable and fairly sturdy. It’s got all that cross-platform plug-and-play goodness that newbies need and pros appreciate, thanks to install-free USB class compliance. If you need more knobs, real wheels and aftertouch, try the EMU Xboard instead. (The EMU also has the option of being battery-powered, as does the Edirol PCRM-1, which could be handy in some mobile situations.) Without any real differentiators from the competition, though, the M-Audio 02 doesn’t stand out as an exceptional value.