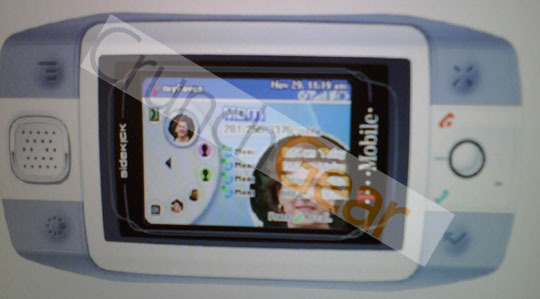 Over the past few months, rumors of a “Sidekick 2.5” were flying about. I took notice and after a few weeks, checked with some of my sources to confirm. Sure enough, a “Sidekick 2.5” was in the works as a trimmed-down alternative to the Sidekick 3. Today I was leaked a picture of the device, which you see above in a color pattern known as “ugly”. Though it’s not the prettiest device, the Sidekick ID (yes, that’s it’s name) comes with all the features you love on your SK3, just without all the crap.

So what’s in a name? The Sidekick ID is trimmed down to showcase communication features rather than the extra crap that’s usually included. You won’t find some of the following features on the Sidekick ID: Bluetooth, MP3 Player, digital camera, or a microSD slot.

Navigation will include a trackball like the Sidekick 3/Tempest arcade machine, but it’s currently unknown if the d-pad will make its way to the Sidekick ID’s final design. Since all we have a picture taken from a T-Mobile employee, it’s hard to gauge if the left-hand side will be a speaker or d-pad. Perhaps both? It’s a possibility, but judging by the looks of it, I’d say a speaker.

The fan-favorite keypad design will stay with the Sidekick ID, allowing you to text and IM to your heart’s content. The display will still flip out and make a ridiculously loud sound so everyone knows you’re using a Sidekick. Don’t worry. You’re still special to us.

So with most of the specs and features covered, two questions remain: “How much will it cost me and when will it be available?”

The Sidekick ID will drop in Q2 this year, most likely during the summer and will cost less than the Sidekick 3. I’ve heard from two sources that a $149.99 price point is being considered to keep it affordable and to make it available to the masses. I mean let’s face it. T-Mobile totally made a killing releasing the Sidekick 3 and making people pay $300 with a 2-year contract. Sure they can leave their contracts now, but T-Mobile still made decent buck.

However, with more core features and less gimmicky crap like an MP3 player, the Sidekick ID has the chance to become one of the hottest communication devices of the summer. Think of it as a Blackberry for non-professionals who still want to keep in touch with friends, family, and co-workers while on the go.

Anyways, that’s it. That’s the dope on the Sidekick ID. It’s not called the “Sidekick 2.5”, it is lacking certain features, which isn’t necessarily a bad thing in this case, and it’s due out this summer. Enjoy.