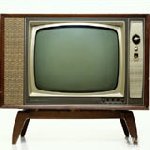 A mighty German company has figured out a way to transmit television signals through the same wires that handle electricity. Devolvo demoed its creation a CeBIT, though for now the technology can only transmit one TV signal at a time. The technology is still in its infancy (even though companies have had ways to share a network connection via the very same wires for a while now) and uses IP to transmit the signal through the wires, with 200m said to be the maximum range. Devolvo didn’t bother telling anyone when (or if) their contraption will be actually available, nor for how much. That’s useless information anyway.