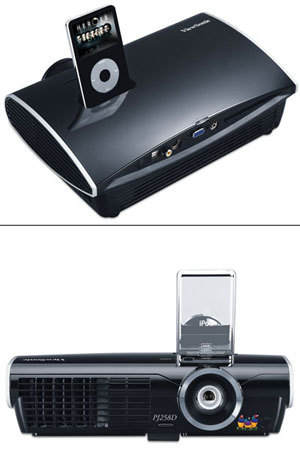 The Viewsonic PJ258D, the first projector to include a built-in iPod dock, will please both men in suits and everyday users. Laptop Magazine just gave it a thorough look-see and only had a few problems. First, while it’s cool and all that it includes an iPod dock to play your videos, the projector’s menu interface is pretty bad. Since part of the reason why the iPod is so popular is that its design aesthetics—menu included—show plenty of polish, the whole experience takes a hit when using the projector. Also, many of the buttons on the projector itself are either poorly labeled or hard to reach. Sure, that’s what the remote control is for, but if Viewsonic wants me to drop $1,000 on its wares they need to be spot on.

Overall, the good outweighs the bad. The projector is rated to output 2200 lumens, but Laptop found that it can even do a little more. The picture held up splendidly even when blown up to eight feet in size. “Groundbreaking,” the Viewsonic PJ258D might benefit from a quick revision, but it’s still a good deal right now. Time to convert all those Xvid, plug in an iPod and watch DVD rips months before the official release.