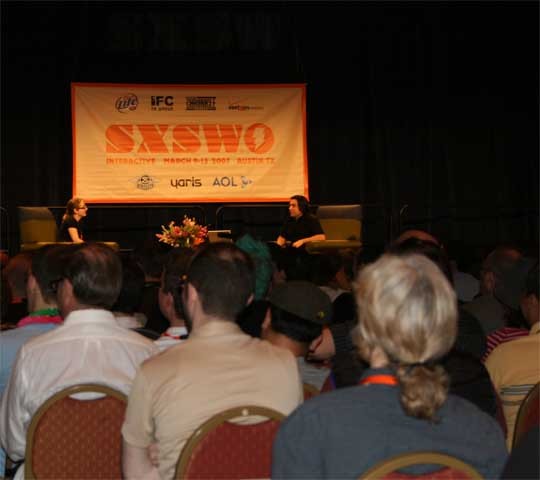 I’m sitting at Phil’s keynote, crazy rave music is playing, people are dancing with glow sticks (not really). We’re just sitting here waiting for it to start. Keep checking out going to live blog this one.

2:30 – Phil and Limor have taken the stage. They’re discussing electronics mods. There are a variety of cool mods that are being discussed. Some of the major ones mentioned are Linux modded Linksys routers and Roomba robots that have been tweaked to do all sorts of other functions. This is purportedly the reason iRobot started the Sentinel Project.

WordPress is sputtering so this might not be immediate

2:35 – Discussion has shifted to creative commons. The benefits of releasing projects on CC. Open source fuels the overall creative process and help drive costs down.

2:40 – Limor shows her chops with a reverse engineered Roland 301 on display. It sounds perfect.

2:46 – Kits and casemods have become immensely popular. There is a video being played. It is incredibly loud.

2:50 – Now they’re showing a RF signal jammer. Phil and Limor did a call demonstration. The jammer blocked the call immediately. There was a spectrum analyzer on display that showed all of signals disappear when the jammer was turned on. Samsung apparently asked if the technology could be put in its phones to block surrounding phones.

That’s pretty much it. We’re in the Q&A section and people are rambling on trying to stump Phil on nonsense.

Alright I’m signing off for now.