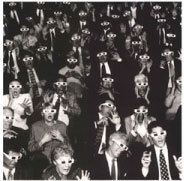 This year’s CES featured a super-secret demo (read: no media) of a tech that just might save DLP: 3D. According to our source, the 2007 Samsung Slim DLP HDTVs will be capable of handing “future 3D games, movies, and other programming via compatible glasses and hardware.” That’s fine, but not if it’s no better than playing Rad Racer on the NES with those awful 3D glasses.

Luckily, our demo-attending source tells us the tech is “mind-blowing” and “literally one of the coolest things” he has ever seen.