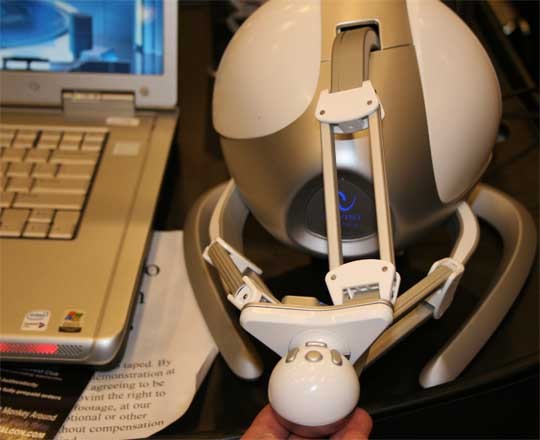 The GDC floor is a barren wasteland in regards to hardware. I’ve scoured it back-and-forth and come across few items worth reporting. Most of the physical things on display are worthless baubles, but there are at least a few things worth mentioning.

One such item is the Novint Falcon. It looks rather stupid, and I’m not sure how useful it’ll be in the long run, but it is an impressive novelty nonetheless.

The device can adjust to represent texture and motion. So things on the screen can b felt through the handset. I was caught off-guard by its ability to mimic such a wide range of sensations. It all feels realistic too.

The first test example involves a series of textured balls. They feel like sand, ice, water, concrete, etc. Touching the surface of the balls with the on-screen hand duplicates the sensation that you’d expect. It doesn’t mimic temperature, but the resistance is spot on. The device slides around on ice and it feels gradient on concrete.

There is a pretty obvious problem from a design perspective: the device doesn’t stick to the table. It needs some sort of bracket it latch it to tables. Otherwise it holds a lot of potential to come flying off its surface. It is weighted, but definitely has issues in that area.

The other thing is that, I’m not sure of what application one could find for a device like this. It seems pretty limited, but I could see it appealing to children.