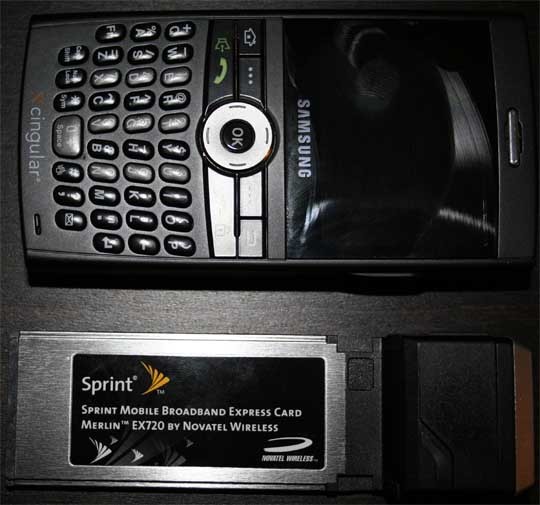 My intention was to review the Sprint EX720 EV-DO Rev A ExpressCard as a comparison with the Merlin XU870 HSDPA ExpressCard. Both cards are manufactured by Novatel, so the playing field is leveled. Couple that with the fact that I’m traveling all over the States for the next several weeks, and I think we’ll have the purest comparison possible. I still intend to do that, but since reviews of the Sprint EX720 are beginning to surface, I figure I better add my $0.02 before the jar gets too full.

The EX720 arrived last week in discretely labeled packaging. I was expecting a few products at the time, so it was something of a surprise until I got the box open (I like to keep the excitement going as long as possible, so I never read the addresses). This time the excitement turned to a sort of clumsy nerd jubilation when I laid eyes upon the contents of the box. Before me sat the EX720 box. It’s sold in something like a giant DVD case.

I was disappointed to discover that the EX720 does not include a protective plastic sleeve. These definitely exist, as my XU870 came with one and both cards fit the same sleeve. Nevertheless, that was just a stutter and it wasn’t enough to wreck my jubilation.

The card was plugged in a few minutes later and I tried to get it running. Unfortunately, some problem exists with setting these cards up on an Apple. Everything was setup as it should have been, but I continued to get “No carrier detected.” After some investigation I discovered that the work around was simply activating the card with a PC.

As luck would have it, an Alienware Area-51 m5790 Special Edition arrived days earlier, so I had an available laptop with an ExpressCard slot. It activated flawlessly on the Alienware and I was off, but before I start talking about performance and whatnot, let me say a few words about PC functionality — namely the fact that it’s better.

The EX720 includes a handy GPS receiver that can do all sorts of cool stuff with its PC software. I’ve yet to discover a way to get this aspect of the card to work on my Macbook Pro. It’s disappointing, because I love GPS even if it is something of a novelty on this item. That said, GPS isn’t my focus here, but I wanted you all to know that it is integrated and it is cool — if you’re on a PC.

Now that that’s out of the way, let’s talk about WWAN. This is my first experience with EV-DO Rev A. I’m overly pleased about the service. While HSDPA is faster, EV-DO has a drastically wider range of proliferation. Where HSDPA is unavailable, EV-DO seems to prevail everywhere and Rev A is increasingly more available. And boy is it beautiful. Beautifully fast. Perhaps the coolest thing I’ve yet reviewed during my entire duration as a gadgets reviewer.

I used to say this about WiFi, but the scope of WWAN is clearly much wider. Broadband anywhere? I’m in. So right now I’m in the Bay Area, the technological center of the universe — or at least of the U.S. I’m assuming that speeds here will be a little faster than other places. I’ve been averaging about 150 KB/s on my downloads and about 30 KB/s on my uploads.

After the setup was out of the way and I figured out the work around for Apple issues, my experience has been wholly possible. You’re fortunate in that you already know that you need to activate the card via PC (because I just told you). That means no pulling of hair, gnashing of teeth, kicking of children, etc. Just get the card and enjoy. You will not be disappointed.

You can get it now through Sprint for $179.99 with the standard two year.

Expect my side-by-side comparison of the XU870 and the EX720 during the week of March 19.