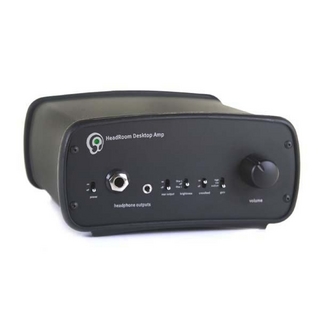 If you happen to have some pricey headphones, a good headphone amp can really make the difference between merely impressive sound and truly ass-kickin’ audiophile glory. Enter the HeadRoom Desktop Amp ($599), a relatively compact headphone amp with a bevy of input and output options and some hot internal components. I recently had a chance to check it out with a set of Sennheiser HD650s and Etymotic ER4S canalphones. Here’s the lowdown.

The matte black metal body doesn’t take up much room on a desk. The top is slightly convex, but you can still put stuff on top of it without it falling off. The outputs and inputs are all on the back, except for a pair of headphone outputs on the front (one quarter inch and one eighth inch). The green LED on the front tells you the amp is on.

Since I already have my PC’s audio going out through an M-Audio Transit USB (which also has an input for recording), I just lined the Transit’s optical output into the amp’s optical in. I used one analog input for my iPod, and I used the analog output for my M-Audio Studiophile DX4 monitor speakers.

On the front, aside from the power switch, two headphone jacks and big black volume knob, there’s a row of four switches. One of them activates the rear outputs so you can easily switch between headphones and speakers, which is probably the single most useful feature of the Desktop Amp. The other three switches alter the sound in some pretty nifty ways, depending on the source material and listening device.

The brightness filter offers two treble enhancers and an off position; most purists will leave this setting off, though I found the filters useful for punching up some acoustic jazz tracks to make the ride cymbal and high hats really sing. The gain selector lets you set the input level depending on the impedance of your output source–use the high setting for driving large speakers, and the medium or low settings for most headphones.

The crossfeed switch engages HeadRoom’s proprietary crossfeed circuit, which changes the shape of the soundstage to account for headphones’ proximity to your ears (compared to speakers). My overall impression is that the crossfeed warms up the sound by bringing the mids a little more in your face. Some tracks really benefit–vocal-oriented tunes and anything with serious panning effects — while acoustic instrumental tracks tend to sound more realistic without it.

Overall, the Desktop Amp improved my Sennheiser HD650 and Etymotic ER4S headphones in terms of fullness, balance, and detail. Soundstaging is notoriously difficult to achieve with headphones, but the combo of the Sennheisers and the Desktop really made me forget I was listening to headphones (as long as I kept my head still) for a bit. The Etymotic canalphones sounded great, but I had a slightly tougher time localizing sounds with them.

If you bought a Ferrari, you wouldn’t put bald tires on it, so why get a really nice pair of cans without a decent headphone amp to power them? If you’re not interested in shelling out $849 for the Desktop Amp (with the DAC option, giving you the digital inputs; $599 for the basic version), you should at least look into HeadRoom’s lower-end amps, like the eminently portable <a href="http://www.headphone.com/products/headphone-amps/the-mobile-line/headroom-total-airhead.php"Total AirHead ($149). On the other hand, if you’ve got even more cash to burn, you can purchase the upgraded version of the Desktop Amp, with improved electronics modules and DACs, all the way up to the Max version–though you’ll need to purchase the optional power supply ($399) — for a total of around $1800.