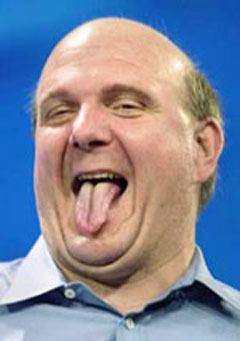 Must suck to be Steve Ballmer right now. The Microsoft CEO has again gone on an insane tirade saying that slowing Vista sales are due to rampant piracy. With Vista sales forecasts overreached and plenty of issues plaguing the OS, Ballmer went on the offensive saying:

“Piracy reduction can be a source of Windows revenue growth, and I think we’ll make some piracy improvements this year.”
“We have new technologies built into Windows Vista, something we call Windows Genuine Advantage [that] we’ve really dialed up in capabilities with the Vista release,” he said. “I do think that will bring some revenue growth. We will have strong growth in the Windows business in emerging markets: China, India, Brazil, Russia and many others. Those markets are very high piracy.”

You heard it folks. Markets in China, India, Brazil, and Russia are no longer markets and are now very high piracy.

Ballmer is just upset that slumping sales figures, a flawed OS, and piracy are painting a bad picture for Vista. Maybe Microsoft should innovate rather than copy if it wants to boost sales. It worked for the Xbox, it can work for Windows.