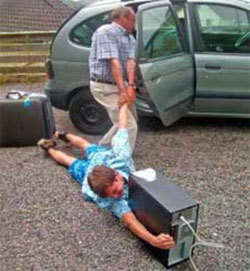 I’m not sure whether to laugh or cry. It seems a 58 year old vet at IBM was caught on adult chatrooms at work, fired, and is now suing Big Blue for $5 million, citing Internet addiction.

“Plaintiff was discharged by IBM because he visited an Internet chat room for a sexual experience during work after he had been previously warned,” the company said.

Now I like me some adult chatrooms as much as the next guy and my Dad knew quite a few of PTSD vets at work — he was in defense logistics — but this sounds like some sort of blow-up between personalities and the result was a lawsuit. That said, what would you guys estimate your work Internet usage to be? A poll post jump.