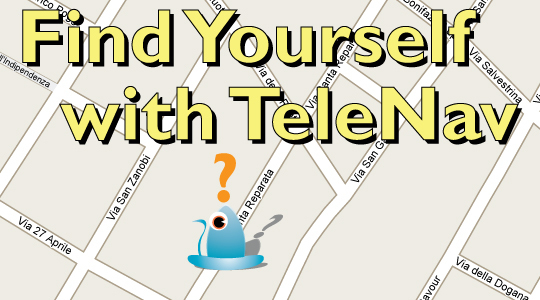 The contest has been closed for awhile now and I want to say, good stuff from all of you. You’re all winners, but only one of you is getting the TeleNav GPS Receiver with three months of service.

Anyway, we’ve now had some minutes to sort through the entries and have narrowed it down to a set of three finalists. Voting will run until 12 noon EST on Sunday

And without further ado, the stories:

This story is from my wonderful, beautiful wife who is utterly direction-challenged. It’s not quite getting lost but the story is priceless! (And absolutely true)

We live in NYC and Melanie saw a blind woman trying to cross the street. So she offered to help the woman across the street. The woman said that she was getting on the subway and Mel offered to help her get down the steps and into the station. So Mel and the blind woman get onto the train and continue talking, and Melanie apparantly talked about heading home to eat dinner or whatever. And the woman asked, “Oh, where do you live” and Melanie answered. At which point the woman said, “Oh, sweetie, I think you’re on the wrong train! You’re going the wrong direction.”

Yes, she got on the subway going the wrong direction. And was corrected by a blind woman.

Talk about the blind leading the blind.

I wish that I could claim that the story below was a one-off incident; unfortunately it’s been proven over the decades, and noted repeatedly by at least a dozen girlfriends and wives, and now recently by my 5 and 8 year old children, that I’m directionally challenged. Being born and raised in San Diego afforded me the luxury of having the ocean and hills as sturdy reference points. The years in Santa Cruz and in the coastal mountains above Silicon Valley strengthened that dependence.

One year, while in graduate school, I attended a neuroscience conference in Miami. The hotel I stayed at was on the beach, and the area was on the tail end of a pretty good storm. While at the conference I found a friend I hadn’t seen in years, and we arranged to meet each other for breakfast the following morning. Her hotel was about 5 miles north along the beach, so I said I’d take the opportunity to get in a nice early run and meet her there.

With a tee shirt, sorts, and flip flops in hand I stepped out into a beautiful warm, breezy morning with the bright sun ripping through gorgeous clouds. After getting my bearings, I took off and was soon in that totally-present state, just moving, breathing, and getting lost in the weather. After about 30 minutes I noticed that there were no more hotels, but kept going. Fifteen minutes later I realized that something was wrong, so I asked a local-looking couple strolling along where this hotel was. They pointed in the direction I came from, and said “about ten miles north”. I was confused and irritated that not only had my friend screwed up the direction, but that the couple said “north” instead of “south”. With no money, no mobile, and no pay phone handy, I took off at a pretty decent pace, only to realize a couple minutes later that my left-coast ocean dependence turned me in the wrong direction.

Now I live in the Kansas City area, where I’ve lost that dependence on the ocean. Unfortunately, I find myself, not infrequently, running in damn cold weather, on an overcast day, miles from civilization, in a foot of snow, asking my Golden Retriever “WTF are we”?

In 1982 I was a 21 year old Navy Corpsman. Our ship had just docked in Hong Kong for a week and me and a buddy set off to explore the city. After realizing the bars were WAY to expensive for our income ranges we started thinking about doing some _real_ site seeing. Wearing our classic Navy “Cracker Jack” uniforms we found a travel agency and decided we wanted to see the Great Wall of China. After hours of waiting and talking and waiting some more we finally had a price and itinerary decided on.

We took a cab to a boat to another boat to a bus stop. We sat on the bench and waited along with about 60 other Chinese people. We finally boarded the bus and quickly fell asleep. I had no idea how long I was sleeping when the bus veered off the road and we saw three Chinese Military Vehicles stopped in the road. They unloaded a LOT of soldiers and approached the bus. After giving orders to the driver the driver motioned for me and my friend to get off the bus, which we did. The bus then took off – leaving us who knows where, and in the hands of Chinese soldiers. None of them spoke any English, and we certainly didn’t speak any Chinese.

We were held at gunpoint as one of the vehicles screamed off down the road. Our “hosts” did not look happy with us. We spent about two hours on the side of the road when the truck came back – with someone that spoke “Engrish”. Although it was a difficult conversation to follow it appears that we had just been accused of “invading” China. We were US Military in mainland China in 1982, and we were in uniform (thinking back, it certainly WAS an invasion, although we were both without even a fingernail clipper on us).

Yeah – we were lost! It took about 6 hours and a lot of yelling and screaming by someone from the US Consulate (who arrived about 4 hours into the ordeal) before were were taken back to a boat and sent back to our VERY VERY pissed off Navy Captain who I am sure got his ass chewed out by the Diplomatic Corps.

The good news is that we didn’t start World War Three by getting lost – the bad news is we spend the rest of our “liberty” cleaning “heads”.

Take Our Poll from PollDaddy.com