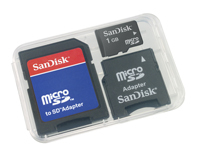 No word on pricing here, but we do know that SanDisk has announced a 4GB microSDHC card in March. A huge improvement over previous capacities, some say that this card alone is posing a threat to the 4GB version of Apple’s iPhone. Utter rubbish, but a good try nonetheless. Don’t go rushing out to buy this card right away though, as most mobile phones that do take microSD can only handle 2GB maximum.

So far, Motorola’s MOTORIZR Z8 is the first phone to officially support a 4GB microSDHC card. The card will come with adaptors for using it regular SD and miniSD card slots so you can transfer all those blurry cam shots of you next to Michael Jackson to your PC.