, some pretty bitchin’ iPod gadgets have been released into the wild, just waiting to devour your dollars like so much plankton. Here are the ones I’ve been drooling over the most recently. 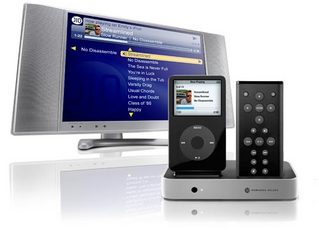 iPod docks tend towards the boring side, but the newest edition of the DLO HomeDock Deluxe ($149, ships in March) is pretty hip. It lets you browse and play the contents of your iPod on your TV and stereo without separating ass and couch. The new version adds support for album art and video browsing. 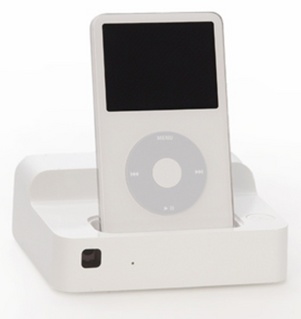 You can’t help but be impressed by the Silex wiDock ($149.95). It’s got built-in 802.11g, so you can sync your iPod with your Windows box or Mac wirelessly. Not as good as having that feature built into the iPod, but it’s the next best thing. It has S-Video and RCA audio jacks so you can integrate it into your home entertainment system. 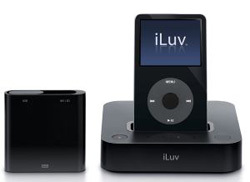 The iLuv i182 video recording dock ($230, available in March) lets you snag videos from any analog source right to your iPod at up to 720 by 480 pixels, maxing out at 5Mbps! You can sync the recordings back to iTunes via the included software, and an adapter lets you record on flash memory cards (except CF) or USB storage devices. It has only two buttons, so it’s idiot-proof.

IPod speaker manufacturers thought they were getting a big kick in the ‘nads when Apple put out its iPod Hi-Fi ($349), but the market didn’t exactly come crashing down. But hey, it’s the loudest, best-sounding portable iPod speaker out there (go ahead, flame away), and it can run on batteries or AC power. 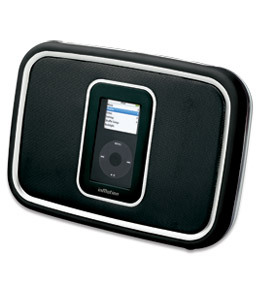 The ruggedized Altec Lansing inMotion IM9 ($199.95) is much more portable and comes with its own little backpack. It’s got lots of thump for something so compact. The JBL On Time ($249.95) is still number one in my book for rousing your passed-out roommate even the deepest sleepers with crystal clear sound.

I’m always bitching about crappy stock earbuds—even the updated iPod whities. My current favorite upgrades for under $100 are the Creative Zen Aurvana canalphones; they’re small, they block out subway noise, and they sound very well balanced. Naturally, if you can shell out $250, I’d go for the Ultimate Ears super.fi 5 Pro in a heartbeat. They sound great and are efficient, so you’ll save battery life on your iPod.

With the northeast caught in a deep freeze these days, I’m partial to the new Nike Performance Hatphones: Stick your iPod nano in the microfiber fleece hat and listen on the built-in speakers. Dorky? Yes. But toasty.

There are as many iPod cases as there are grains of sand in the Sahara, but I’ve found a few exceptional ones. DLO’s PodFolio ($29.99) and Relaxed Leather ($34.99) lines of cases are my current faves, with plenty of classy designs for the price. If you absolutely want to protect your iPod from harsh conditions, though, an ultra-rugged Otterbox[[http://www.otterbox.com/products/ipod_cases/]] is ($39.95 to $49.95) will do the trick whether you’re in the hot tub or in the desert.

(My all-time favorite case—the DLO NanoTune, which combines a headphone amp, FM tuner, and FM transmitter in a protective hard shell—fell off my list because it only works with the first-gen iPod nano. C’mon guys, make one for the new nano!) 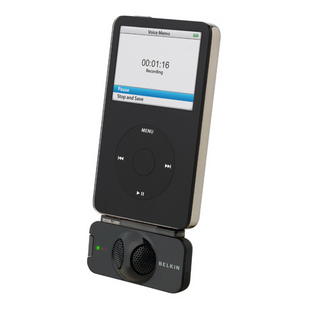 Audio recording is one of the iPod’s most under-appreciated capabilities, The Belkin TuneTalk Stereo[[http://catalog.belkin.com/IWCatProductPage.process?Product_Id=277661]] ($79.99) captures live audio on your iPod via the built-in mic or the line-in adapter (for plugging in real mics or a line source). It’s even got a switchable automatic gain control. If you use the built-in mic, you’re best off using it with a Nano, which has no moving parts and won’t add any noise to your recordings.

I hate FM transmitters. But it you must use one, the DLO TransDock[[http://www.dlo.com/Products/TDock_Prod.tpl]] ($69.99) works better than most in the car. You can also use it to charge your phone while music plays. Another alternative: The no-frills Belkin TuneFM[[http://catalog.belkin.com/IWCatProductPage.process?Product_Id=257339]] comes with a car charger, but it’s very thin and can also be powered by an iPod’s battery. 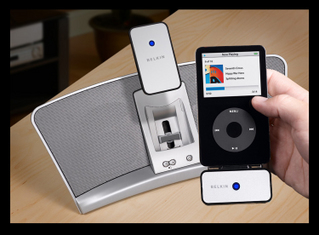 Speaking of wireless, Belkin’s Bluetooth iPod dock adapter[[http://www.belkin.com/pressroom/releases/uploads/01_08_07BlueToothDockAdapter.html]] Bluetooth-ifies any iPod speaker or dock. Plug the dongle into your iPod and sit the receiver in any iPod dock, and you can use your iPod as a remote. (Hopefully soon iPods will do this sans dongle.)

My number one favorite iPod accessory (drum roll please) is still the Apple FM Radio Remote[[http://www.apple.com/ipod/accessories.html]] )$49). I can dig All Things Considered right on my iPod like most non-Apple players can do on their ownand adjust volume or skip tracks without reaching into my Levi’s.