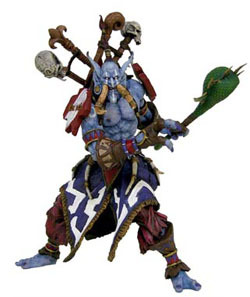 With World of Warcraft soaring past 8 million users, it was only a matter of time before more action figures were concocted up by a marketing team at Blizzard. Through a partnership with DC Unlimited (DC Comics), figures will be available sometime in Q3, with the debut at next week’s Toy Fair in NYC (CG will be there). Says DC, the debut figurines will be between 5 to 8 inches and made of PVC vinyl.

Four initial figures will be released with a two-character bonus set. You’ll be able to scoop up a Blood Elf Rogue, an Undead Lock, an Orc Shammy and a Dwarf Warrior, as well as a deluxe edition Draenei Pally and Illidan Stormrage.

No word yet on prices, but I’m going to guess you can walk into an EB Games and find some crappy action figures already on sale as a gauge.