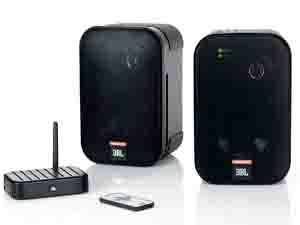 Here’s a potentially good idea: the new JBL On Air Control 2.4G wireless speaker system. I’ve always had a problem with surround sound systems in this room because of its peculiar shape. Something like this would presumably resolve such a problem by allowing me to position speakers in locations that are difficult for traditional, tethered speakers.

The system includes a transmitter and two speakers that each feature 30-watt built-in amplification. The active speaker includes a mini-jack input for connection to a second local audio source, and a subwoofer output that enables the speakers to be used as part of a 2.1-channel satellite/ subwoofer audio system.

One transmitter can serve up to four speakers, so you can have a surround system with entirely wireless satellites. The On Air Control loudspeaker system will be available in Feb. for an MSRP of $349.